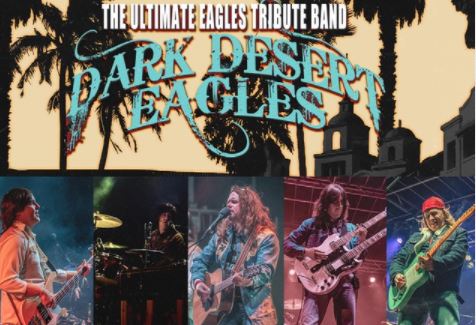 Event Description:
For fans of The Eagles who long for the LIVE re-creation of some of the greatest hits of a generation, the Dark Desert Eagles are the ULTIMATE Tribute to The Eagles! Songs from the best-selling Greatest Hits album of all time (Eagles Their Greatest Hits 1971-1975) along with hits from Hotel California, as well as several gems from Joe Walsh’s solo career are masterfully re-created during a live show of the Dark Desert Eagles. Buckle up and get ready to enjoy a stunning musical tribute to America’s Greatest Rock Band in the peak of their career! Touched by the passing of Eagles co-founder Glenn Frey, Pat Badger (an original member of the multi-platinum rock act Extreme) set out to form the Dark Desert Eagles. Badger is an enormous fan of The Eagles’ musicianship, vocal harmonies and timeless catalog. Having toured the world with Extreme, and having been a part of a group that sold over 10 million records featuring Top 10 hits like Hole Hearted and the Number 1 Grammy nominated smash hit More Than Words, Pat Badger had a vision for the types of musicians he would need to create the ultimate tribute to The Eagles. “But just pulling off the music is just part of it.” Badger says, “We really want to bring the audience back in time to the 70s! The image is almost as important as the music and we have really payed attention to detail on the wardrobe, the hairstyles, the guitars… everything that made the Eagles so cool!” He goes on to say, “We’re not just pretending to be the Eagles, we are the Dark Desert Eagles who are the self-proclaimed World’s Greatest Eagles Tribute band from 1977! We have traveled through time to the present day and when the house lights go down, the audience finds themselves in a Twilight Zone episode meets Back To The Future… It’s a blast!” REVIEWS: “Incredible show! This is one of the best shows I’ve been to in a long time I really felt like I was watching the Eagles a must-see!” Posted by Gregg4 “The Dark Desert Eagles belong up there with the best tribute bands of all time. You can close your eyes and feel you are attending a real Eagles concert. I would recommend this group to anyone who is an eagles fan from way back or to anyone who has never heard an eagles tune. Great job guys and keep up the good work!!” Posted by Mikey1234888 “The show was non-stop entertainment . Funny, talented band that rocked the house!” Posted by speciallittlelady “The Dark Desert Eagles are a MUST SEE! If you like the Eagles, you will love this show. The band really brings you back in time” Posted by MaryM123 “Closed my eyes and I was back in the Boston Garden in the 70’s …. What an awesome show!” Posted by tcfraser
Location:
The Cape Cod Melody Tent
41 West Main Street
Hyannis MA
View a Map
Date/Time Information:
Friday August 20th at 8pm
Contact Information:
marketing@themusiccircus.org
Send an Email
Fees/Admission:
Ticket Prices: $37
Set a Reminder:
Business Directory News Releases Events Calendar Hot Deals Member To Member Deals Job Postings Contact Us Information & Brochures Weather Join The Chamber